It was with great sadness that we heard of the death this week of Gene Wilder. He was a comedic actor as well as a screenwriter, director and author. He is probably best known for his work with director Mel Brooks and pairings with Richard Pryor. Fans of his films usually all have their own different favorite quotes. 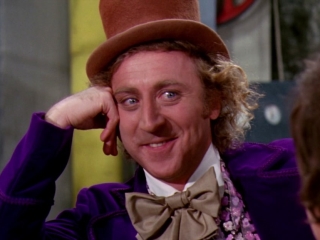 Here’s a nice Variety article on Gene Wilder
In our store we have the following of his movies:
New to (or rediscovering) this actor? Try:
Willy Wonka and the Chocolate Factory (in our Children’s or Blu-Ray sections) – (G, 1971). Amazon.com description: “Take an unforgettable, uniquely magical, musical journey through the deliciously delightful, whimsically wonderful world of Willy Wonka And The Chocolate Factory. When eccentric candy man Willy Wonka (Gene Wilder) promises a lifetime supply of sweets and a tour of his chocolate factory to five lucky kids, penniless Charlie Bucket (Peter Ostrum) seeks the priceless golden ticket that will make him a winner. Thanks to his Grandpa Joe (Jack Albertson), Charlie gets the prize of his dreams! But a far more wonderful surprise than Charlie ever imagined awaits him. In a land of chocolate waterfalls, giant lollipops, edible flowers and, of course, Oompa Loompas, it’s nonstop, mouth-watering fun in the timeless fantasy.”
IMDb page where you can see a trailer and read more details.
The Producers. (in Comedy or Mel Brooks section) – (PG, 1967). Amazon.com description: A “startling, stunning, outrageous [and] breathtaking debut” (Los Angeles Times) from acclaimed writer/director Mel Brooks (Young Frankenstein, Spaceballs), this Oscar®-winning* comedy combines “pure pell-Mel lunacy [and] wild, ad-lib energy [into an] uproariously funny” (Time) film! Low-rent Broadway producer Max Bialystock (Zero Mostel) and his high-strung accountant, Leo Bloom (Gene Wilder), discover that, with the help of a few gullible investors, they can make more money on a flop than on a hit! Armed with the worst show ever written (“Springtime for Hitler”) and an equally horrific cast, this double-dealing duo is banking on disaster. But when their sure-to-offend musical becomes a surprise smash hit, they find themselves in the middle of a Broadway blitzkrieg! *1968: Original Screenplay.
IMDb page where you can see a trailer and read more details.
Young Frankenstein (in the Mel Brooks section – (PG, 1974).  From Amazon.com: “If you were to argue that Mel Brooks’s Young Frankenstein ranks among the top-ten funniest movies of all time, nobody could reasonably dispute the claim. Spoofing classic horror in the way that Brooks’s previous film Blazing Saddles sent up classic Westerns, the movie is both a loving tribute and a raucous, irreverent parody of Universal’s classic horror films Frankenstein (1931) and Bride of Frankenstein(1935). Filming in glorious black and white, Brooks re-created the Frankenstein laboratory using the same equipment from the original Frankenstein(courtesy of designer Kenneth Strickfaden), and this loving attention to physical and stylistic detail creates a solid foundation for nonstop comedy. The story, of course, involves Frederick Frankenstein (Gene Wilder) and his effort to resume experiments in re-animation pioneered by his late father. (He’s got some help, since dad left behind a book titled How I Did It.) Assisting him is the hapless hunchback Igor (Marty Feldman) and the buxom but none-too-bright maiden Inga (Teri Garr), and when Frankenstein succeeds in creating his monster (Peter Boyle), the stage is set for an outrageous revision of the Frankenstein legend. With comedy highlights too numerous to mention, Brooks guides his brilliant cast (also including Cloris Leachman, Madeline Kahn, Kenneth Mars, and Gene Hackman in a classic cameo role) through scene after scene of inspired hilarity. Indeed, Young Frankenstein is a charmed film, nothing less than a comedy classic, representing the finest work from everyone involved. Not one joke has lost its payoff, and none of the countless gags have lost their zany appeal. From a career that includes some of the best comedies ever made, this is the film for which Mel Brooks will be most fondly remembered. … And just remember–that’s Fronkensteen. — Jeff Shannon.”
IMDb page where you can see a trailer and read more details 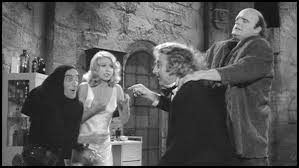 Already a fan? Try:
Blazing Saddles (in the Mel Brooks section) – (R, 1974) From Amazon.com: “The railroad’s got to run through the town of Rock Ridge. How do you drive out the townfolk in order to steal their land? Send in the toughest gang you’ve got…and name a new sheriff who’ll last about 24 hours. But that’s not really the plot of Blazing Saddles, just the pretext. Once Mel Brooks’ lunatic film many call his best gets started, logic is lost in a blizzard of gags, jokes, quips, puns, howlers, growlers and outrageous assaults upon good taste or any taste at all. Cleavon Little as the new lawman, Gene Wilder as the wacko Waco Kid, Brooks himself as a dim-witted politico and Madeline Kahn in her Marlene Dietrich send-up that earned an Academy Award nomination all give this sagebrush saga their lunatic best. And when Blazing Saddles can’t contain itself at the finale, it just proves the Old West will never be the same!”
IMDb page where you can see a trailer and read more details 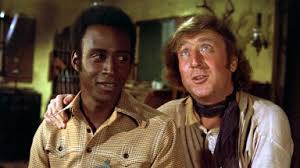 Silver Streak– (PG,1976) From IMDb:” On a long-distance train trip, a man finds romance but also finds himself in danger of being killed, or at least pushed off the train.” IMDb page
Stir Crazy(in Comedy) – (R, 1980) From Amazon.com: “One of the looniest pictures to come along in some time! STIR CRAZY teams two of the most brilliant and zany comic performers today: Richard Pryor and Gene Wilder. Skip (Wilder) and Harry (Pryor) have both been fired from their jobs, so they take off in their van for California to seek fame and fortune, but somewhere along the way the van conks out and they’re broke and…well, they have to eat, right? So they land a gig as singing and dancing woodpeckers to promote a bank opening. When two bank robbers steal their costumes and stick up the bank, guess who gets the blame? Skip and Harry are carted off to the state pen for 125 years. They try to keep their sanity and their lives amidst: a sadistic warden, a hulking mass-murderer and an inter-prison rodeo – all with great hilarity.” IMDb page
Rent one or several of these, or stop in the store to purchase your own copy. Remember that any movie on our shelves can be bought for the replacement cost!
Posted in Reviews & Recommendations