This week’s featured section is our James Bond section, in Action. There’s something about summer that calls for mindless movies with lots of eye candy, and the James Bond movies have been delivering that, for better or worse, since 1962. There are so many of these movies that our Bond section covers three shelves.  There are different actors who played Bond, different eras and “feels”, and of course different Bond girls.  Rolling Stone created a list here of the best and worst of the genre, but of course most people have their own picks. You can also consult the Rotten Tomatoes James Bond Countdown, although newer movies tend to be rated more often than the older ones, so their ranking may be somewhat skewed by that.
You can find all these films in VisArt’s Bond section, in the bigger Action section (look for a white “Action” sign hanging from the ceiling). Just ask a staff member if you need help finding them, or if you want recommendations.
New to this section? Try:
Goldfinger – (PG, 1964).  Although dated, in a lot of ways this is the classic Bond movie

with Sean Connery.  Just the third movie in the series, it introduced the Aston Martin DB5 with gadgets including a passenger ejector seat. There’s a fairly believable villain in the bullion dealer Auric Goldfinger, with his servant Oddjob wielding a bowler hat as a weapon, and classic “Bond girl” Pussy Galore as a judo expert and his personal pilot. The documentaries about the making of this movie have a lot of interesting parts too.

The Spy Who Loved Me – (PG, 1977) The opening ski scene and chase, the theme song “Nobody Does It Better” by Carly Simon, steel-toothed Jaws played by Richard Kiel, Roger Moore in sweeping robes on a camel (complete with musical cue from Lawrence of Arabia at one point), scenes both in Egyptian ruins and an underwater lair, this one’s got it all.  Sure, the scenes shot above-water of tankers and submarines may go on too long, but a plot about capturing nuclear submarines has to have some of that.  Barbara Bach as Russian agent Anya Amasova is beautiful and a little less useless than most “Bond girls” although you could start a drinking game counting how many times she says “James!!” in that one particular tone of voice. And then there’s that transforming white Lotus sports car…

Casino Royale– (PG-13, 2006). The most recent reboot of the series, and third film with this title, this movie starred Daniel Craig as a consistent-with-the-icon Bond who is still very modern. It features a very long jaw-dropping Parkour chase scene, lots of card-play in glamorous locales, Judi Dench (as a female! M) and sleek and smart Bond girl Vesper Lynd played by Eva Green.
Already a fan? Try:
Casino Royale– (1954) This was an hour-long black-and-white TV special starring the first man to play Bond, American actor Barry Nelson, and included Peter Lorre in the cast.  Nelson later showed up in episodes of Alfred Hitchcock Presents and Twilight Zone before appearing in Airport and The Shining, but never again played Bond.
Casino Royale (1967, “TV14”) Yes, a third Casino Royale exists. This one’s a spoof very loosely based on the first novel, starring David Niven as the “original” Bond, but six other agents pretend to be Bond to confuse “SMERSH”.  It has Peter Sellers and Ursula Andress, and Burt Bacharach’s score earned him an Academy Award nomination for the song “The Look of Love.”
On Her Majesty’s Secret Service – (1969) This movie featured George Lazenby in his one 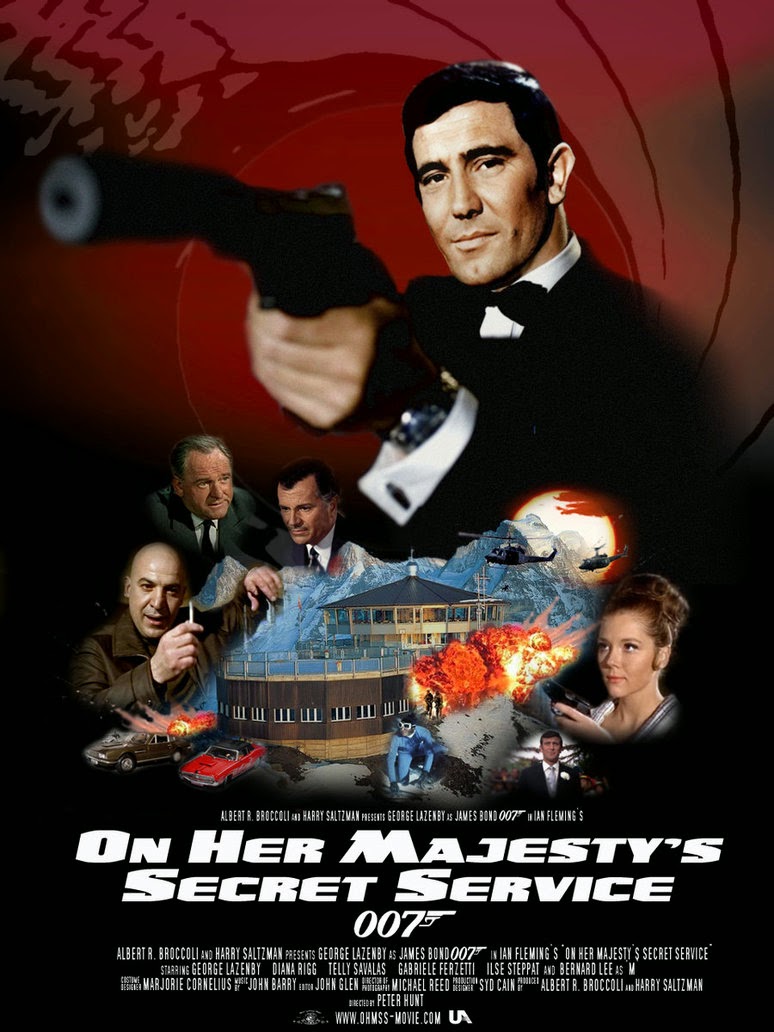 appearance as Bond. The plot is fairly thin, but Diana Rigg is wonderful as the woman who Bond marries.  It also features Telly Savalas playing villain Blofeld (various actors played the character in different movies) doing allergy research (yes, that’s right) as a means to conquering the world.  The scenery in Portugal and the skiing scenes in Switzerland are also memorable, even if badly blue-screened.