Fudgy Says: this is a MUST SEE pick. this film is visually stunning and yet it’s so hard to watch. although this is a fictional story based on the accounts of two scientists, Embrace of the Serpent shows us the damaging results of colonization in the Amazon. I highly recommend watching this film. The cinematography is amazing, the acting (with non-professional/real indigenous actors!!!) was on point, and the story itself was one that desperately needed to be told. Not to mention that the director was able to handle the subject with incredible grace and cultural sensitivity. 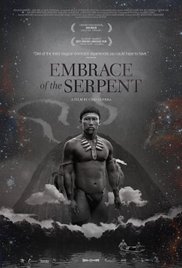 “At once blistering and poetic, the ravages of colonialism cast a dark shadow over the South American landscape in EMBRACE OF THE SERPENT, the third feature by Ciro Guerra. Filmed in stunning black-and-white, SERPENT centers on Karamakate, an Amazonian shaman and the last survivor of his people, and the two scientists who, over the course of 40 years, build a friendship with him. The film was inspired by the real-life journals of two explorers (Theodor Koch-Grünberg and Richard Evans Schultes) who traveled through the Colombian Amazon during the last century in search of the sacred and difficult-to-find psychedelic Yakruna plant.”